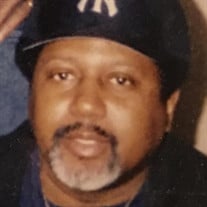 Willard McDowell Jr. was called home to glory on Tuesday, October 27, 2020. Willard, was born on March 26, 1947 in Timmonsville, South Carolina to Caretha Dickey and Willard McDowell Sr.  Willard, was affectionately known to friends and family as "Steve" or "Uncle Steve".  He graduated from State High School in South Carolina and at the age of 18 he entered the military. After being Honorably discharged from the military, he moved to Paterson, NJ. There he met the love of his life and married Betty McLaurin on July 25, 1987.  Willard accepted Christ into his life at an early age and attended the Solid Rock Church in Paterson, New Jersey until he was physically unable. Willard worked for Paterson Bleachery for 28 years until the company went out of business. He then began working for Barnet Hospital where he retired after 12 years. During his retirement, Steve enjoyed relaxing, watching his favorite TV shows, baseball, playing pool and taking photos at family gatherings.  Willard leaves to cherish his memories his loving wife, Betty McDowell; brother Ray McDowell; sister-in-law Carrie Norman along with a host of nieces, nephews, cousins and extended family and friends far to many to mention. Willard was proceeded in death by his parents, Caretha and Willard McDowell. Poem to my husband: Losing a Husband as SPECIAL as you has left my heart aching it's broken in two No words can describe all the grief and the pain I'd give all I have just to see you again But you're with the Angels and for now I can wait for we'll meet again, dear beside Heaven's gate. Even during times of social distancing, anyone who has suffered a loss deserves love and support more than ever before. Let the family know you care by leaving treasured memories, thoughts and prayers in our Online Guestbook.

The family of Willard McDowell Jr. created this Life Tributes page to make it easy to share your memories.