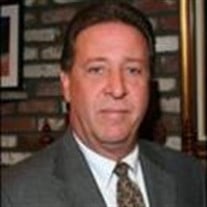 Scillieri, Stephen A., 57, Licensed Funeral Director and Owner of Scillieri Funeral Home on Fifth Avenue in Paterson, passed away suddenly on September 29, 2014. Born in Paterson, he moved to Hawthorne in 1987, returning to Paterson in 2003. Steve was educated at Blessed Sacrament Grammer School, Paterson, and Don Bosco Preparatory High School in Ramsey. Steve attended Marist College in Poughkeepsie N.Y. and graduated from Fairleigh Dickinson University, Teaneck. After Graduation, Steve attended and graduated from American Academy Mc Allister Institute of Mortuary Science New York City, NY. In 1984 Steve was certified as an "Eye Enucleator" from the New Jersey Eye Bank, Newark, N.J. Steve is a member of the Passaic County Funeral Directors Association and New Jersey State Funeral Directors Association. Steve has been a Licensed Practioner of Mortuary Science in the State of NJ since 1983. While living in Hawthorne Steve was a member of the Hawthorne Rotary Club where he was named "Rotarian of the Year" in 1992-1993 and also served as "Fund Raising Chairman" for the club and served as President from 1996-1997. Steve was appointed to the "Hawthorne Board of Recreation" where he served for 13 years, serving as president for the last two. He is also a member of the Mohawks Athletic Club Hawthorne, and the Knights of Columbus Council 240, Paterson. He is also a member of the Paterson Chamber of Commerce. Steve was the former basketball C.Y.O. coach for Blessed Sacrament School of Paterson. For his efforts he was awarded the Joseph Vander Bosh " Award of Merit" in 1987 from Paterson C.Y.O. He was also awarded The Joseph Passero Memorial Award from the All Wags Athletic Club in 1988. In 2005, Steve was inducted into the Don Bosco Prep Hall Of Fame. A Certified Open Water P.A.D.I Diver, Steve traveled many times to the Hawaiian Island of Molokai, where he enjoyed Scuba Diving, Snorkeling and Hunting, as well as spending time with his many Hawaiian friends. Also being active in High School Sports in Passaic, Morris, and Bergen Counties, he has been an Assistant Head Coach at Manchester High School, Haledon, Elmwood Park High School, Elmwood Park, Don Bosco Prep High School, Ramsey, Don Bosco Technical High School of Paterson, and Bayley Ellard High School, of Madison. Beloved father of Stephen J. "T.J" Scillieri and his wife Nicole, and Sean Anthony Scillieri. Loving son of Jane P. (Dwyer) and the late Stephen J. Scillieri. Dear brother of Joellen Cox. Loving companion of Mary Ellen Walesiewicz. Funeral Saturday 8:30 AM at the Scillieri Funeral Home, 351 Fifth Ave., Paterson, and 10 AM at Blessed Sacrament RC Church, Paterson. Cremation will be private. Visiting Thursday 7-9 PM and Friday 2-4 and 7-9 PM at the funeral home. In lieu of flowers, donations made to Blessed Sacrament RC Church, 224 East 18th St., Paterson, NJ 07524, in memory of Steve, would be greatly appreciated.

Scillieri, Stephen A., 57, Licensed Funeral Director and Owner of Scillieri Funeral Home on Fifth Avenue in Paterson, passed away suddenly on September 29, 2014. Born in Paterson, he moved to Hawthorne in 1987, returning to Paterson in 2003.... View Obituary & Service Information

The family of Mr. Stephen A. Scillieri created this Life Tributes page to make it easy to share your memories.

Send flowers to the Scillieri family.