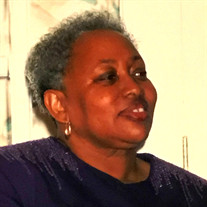 Shirlene grew up in the Wilksburg community of Chester, South Carolina. She was the daughter of the late Charles and Leora Gist Gregory. Shirlene was educated in the public school system of Chester County. Seeing that there was no future for her in South Carolina, Shirlene set her eyes on seeking an opportunity for employment in Paterson, NJ. She would tell the story of seeing only cotton fields before her and she knew she had to see what was beyond Chester County. She left her two-year old daughter in the care of her parents and two younger sisters as she headed to Paterson, NJ. About a year or so later, she met the love of her life, Aaron David Walker, who pursued her and later made her his wife. The couple was married on June 5, 1965, and of their union came a daughter in 1969. All who had the pleasure of knowing Shirlene, knew her as a genuine, good Christian, and loyal person. A friend who would keep your secrets and a person that would always lend a helping hand. If you needed a bite to eat or a ride, she would make herself available. Shirlene was a born again Christian and a dedicated member of Christ Temple Baptist Church of Paterson, NJ for more than 30 years. She worked for over 20 years in the factory industry until her jobs moved and then she became a housekeeper with her friend Eloise for some years after until she retired and took care of two of her grandchildren. After a long career in NJ, the Walker’s packed up and retired to Rock Hill, SC where they built their first house. They moved their membership to Cedar Grove Baptist Church in Chester, SC. In December 2010, Shirlene lost the love of her life; her husband, Aaron, went home to be with the Lord. Over the next 6 years her health continued to decline. On Monday, May 8, 2017, around 9:00 a.m. the final chapter to Shirlene’s earthly life was written. Her soul went to be with the Lord and her beloved “A”. Eight brothers and sisters preceded Shirlene in death. She leaves to cherish her memories two daughters, Minister Yvonne Gregory Hughes and husband, Rodney, Chester, SC; and Donna Walker, Clifton, NJ. She has four grandchildren, Christopher Hughes, Lancaster, SC, Sierra Hughes, Rock Hill, SC, Natiah Rosario and Vaughn Rosario, Clifton, NJ; one great-grand child, Knight Jones, Clifton, NJ. She also leaves behind three sisters, Annie Bell Hairston and husband, Gregory, Philadelphia, PA; Ruth Miles and husband, Pastor McKinley, Spartanburg, SC and Peggy Jean Gregory, Chester, SC. A host of nieces, nephews, cousins and friends and her very special, devoted, and dedicated cousin and best friend who took care of her until the very end, Angela Sanders.

Shirlene grew up in the Wilksburg community of Chester, South Carolina. She was the daughter of the late Charles and Leora Gist Gregory. Shirlene was educated in the public school system of Chester County. Seeing that there was no future... View Obituary & Service Information

The family of Shirlene Walker created this Life Tributes page to make it easy to share your memories.

Shirlene grew up in the Wilksburg community of Chester, South...

Send flowers to the Walker family.