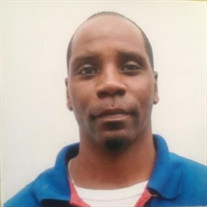 Robert Taveras Hill was born on August 12, 1975, in Paterson, NJ to Robert and Jean Hill. He was educated in the Paterson School System and graduated from Passaic County Technical and Vocational High School in 1993. Affectionally known as Tavares by family, he was involved in an array of activities as a child including, dance, karate, baseball, drawing, and electronics. Oftentimes, you could catch him taking things apart and putting them back together again or looking at comic strips and drawing the characters. He was very talented in those areas, and as such, his affinity led him to pursue those interests. Tavares enrolled in a local institute and majored in architectural drafting. After a while, he switched paths and enrolled in computer courses, where he found his niche. In 1998, he graduated from Computer Learning Center with a diploma in Electronics Computer Applications and Networking Technology. After working and gaining experience in his chosen field for a few years, Tavares began working at CVS. He worked with the company for 17 years in various capacities. He was touted as being a dependable, reliable, hardworking coworker and employee. And even though he was quiet, his coworkers knew he was there to listen to them, lend a helping hand when needed, and to make them laugh. Though you often found Tavares working, sometimes you would just see him walking down the street, with his headphones on, listening to his favorite music. He was an avid sports fan and on any given day, depending on the season, you could catch him rooting for his favorite sports teams, which included, the New York Jets, the New York Knicks, the New York Mets, and the New York Yankees. And when he was not watching sports, you could find him traveling, often to Peru, one of his favorite destinations to visit. Tavares’ life was cut short due to illness, and he entered into eternal rest on July 6, 2021. He was predeceased by his maternal grandparents: Ruth Chandler Johnson and Frank Murray Jr.; Paternal grandparents: Clifford and Beatrice Scott Hill; Paternal aunts: Mary Lee Thomas and Willie Ena Maye; a maternal aunt: Christine Alston and Paternal uncle: King Hodges Hill. Left to celebrate his life and memory are his loving parents, Robert and Jean Hill of Paterson, NJ; Two brothers: Frederick A. Huntington, of East Orange, NJ and Joseph Huntington, of Las Vegas, NV; Two sisters: Tisha P. Hill and Fantasha D. Hill, both of Paterson, NJ; Three nephews: Nalik Q. Hodges of Paterson, NJ; Leonard Sims of Newark, NJ and Malachi Huntington of Pensacola, FL; Four Nieces, Felicia S. Capers of Totowa, NJ; Shauntae M. Huntington of Greenville, NC, Malayah D. Hodges of Paterson, NJ and Jamilah R. Huntington of Las Vegas, NV; Nine great- nieces and nephews, including Naziyah M. V. Hodges, whom he absolutely adored; Six uncles: Clifford Hill Jr. of Lakeland, FL; Roosevelt Maye of Orlando, FL; King Murray (Edna) of Paterson, NJ; Johnny R. Murray of Bowling Green, VA (Margie), George E. Murray of Bowling Green, VA and James A. Murray (Chita) of Bowling Green, VA.; Devoted cousins: Mia Daughety, Bevelyn Bowman, and Patricia McNeil; Good friend: Cecilia Roque, along with a host of loving cousins, friends and work colleagues. Even during times of social distancing, anyone who has suffered a loss deserves love and support more than ever before. Let the family know you care by leaving treasured memories, thoughts and prayers on the Tribute Wall.

Robert Taveras Hill was born on August 12, 1975, in Paterson, NJ to Robert and Jean Hill. He was educated in the Paterson School System and graduated from Passaic County Technical and Vocational High School in 1993. Affectionally known as Tavares... View Obituary & Service Information

The family of Robert Taveras Hill created this Life Tributes page to make it easy to share your memories.

Send flowers to the Hill family.