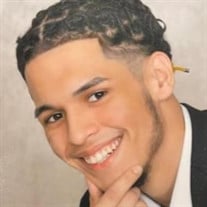 On January 19, 2022 Robert gained his wings to move from this home to another home not made by man. Robert Daniel Cuadra, also known as “Gordo” to his loving family, was born on September 11, 2003 to his mother, Ivernis Santiago, and father, Robert Cuadra. Robert lived in Paterson, NJ, where the presence of his Puerto Rican culture was enriched and celebrated. Robert attended Community Charter School of Paterson, PS 14, PS 5, and Don Bosco Academy for his elementary school career. Robert currently attended HARP Academy High School in the city of Paterson until his untimely death, where he was expected to graduate in the Spring of 2022.  Throughout his academic career, Robert was an honor student, demonstrating a bright and promising future. In his freshman year at HARP Academy, Robert began engaging in the TRIO Upward Bound Program at Montclair State University, in efforts to obtain an academic scholarship to fulfill his desire of attending the University of his choice. He also took part in a dual degree program at Rutgers University.  Just shy of his high school graduation, Robert received a full scholarship to attend Montclair State University in the Fall of 2022, where he was excited to be enrolled. His major was not yet decided, however, he showed interest in potentially becoming a Veterinarian due to his love of animals.  Robert also showed interest in joining the military after he completed college.  He played an integral role in both his family and within his community. He was a cherished son, and a devoted brother and father figure to his three younger brothers.  Volunteering through various charities and drives, as well as maintaining employment at The Brownstone. Robert was passionate about his artistic abilities and found it healing to his soul, and was truly dedicated to bettering himself.  He engaged in physical exercise workouts as well as filming & logging his workouts daily.  Robert joined ‘Ike & Randy’s Boxing Gym’, where he verbalized feeling a sense of belonging and family.  He also enjoyed spending time with his little brothers and friends, where they played the PlayStation 5 and other electronic games. Robert also fulfilled his love of music by taking guitar lessons twice a week, as well as listening to music all throughout the day.  He had the time of his life immersing himself in at the beach in water activities, along with the love for animals big and small and lastly movies of all kinds. Robert was a polished young man; a true man of honor. He was a kind spirit; a gentleman at heart. He possessed a soul that had the ability to touch everyone he encountered. With a sweet smile and an infectious laugh, Robert was someone you always wanted to surround yourself with. He remained positive and resilient throughout all of life’s challenges, and never faltered in serving as a sense of support to others. He was sincere, selfless, loving, and goofy. He was fearless, strong, and maintained the ultimate sense of perseverance. Robert left us with an impactful philosophy that shaped his perception of life itself. One of which we should all attempt to live by in his honor: “Underlying all that is negative in the world, all that is in a way painful and evil, there is a kind of necessity to it. It goes with the good. It is necessary for the good. Disorder is necessary for the manifestation of order, just as you must have a black background to show a light figure. And then when one sees that, a profound transformation takes place in one's attitude to the world.” - Alan Watts Robert is survived by his Beloved Parents, Ivernis Santiago and Robert Cuadra; Devoted Grandparents, Sonia Rivera, Jose Santiago, Elizabeth Vicente, Juanita Acevedo, and Marcial Acevedo; Adored Brothers, Jayden Cuadra, Jordan Santiago, Nathaniel Robledo, and Lujan Robledo; Cherished Sisters, Jennifer Silva and Nova Cuadra; Treasured Aunts, Maritza Rivera, Damaris Cordova, Keyra Jimenez, Alexandra Santiago, Terri Vicente, Isabel Campos, Angelica Campos, Kassandra Campos, Xitlali Acevedo, Denise Campos, and Heidi Acevedo; Respected Uncles, Kenneth Arias, Jose Santiago, Joshua Caldero, Tirso Vicente, Joel Cuadra, Daniel Campos, and Leobardo Acevedo; Prized Godparents, Manuela and Thomas Warch and last but not forgotten Water Godfather Jose Ortega; and a host of other family members. Far too many to be mentioned, but he loved them all; and his HARP Academy Family, along with all other extraordinary friends throughout his lifetime. Even during times of social distancing, anyone who has suffered a loss deserves love and support more than ever before. Let the family know you care by leaving treasured memories, thoughts and prayers on the Tribute Wall.

On January 19, 2022 Robert gained his wings to move from this home to another home not made by man. Robert Daniel Cuadra, also known as &#8220;Gordo&#8221; to his loving family, was born on September 11, 2003 to his mother, Ivernis Santiago,... View Obituary & Service Information

Send flowers to the Cuadra family.