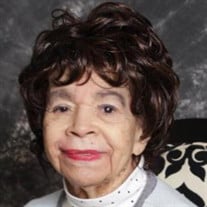 Olivia M Joyner transitioned into her eternal life on July 4, 2021 at Saucon Valley Manor Senior facility Hellertown PA. She was born February 4, 1928 in Portsmouth, Virginia to the late Ethel Watts Creekmur and Winfield E Creekmur. Olivia started her early childhood education in the Portsmouth public school system graduating from IC Norcom High School. She later attended Bennett College in Greensboro, NC. After leaving college she worked in her parent’s florist business and for her Uncles who owned Seaview Beach in the Virginia Beach area. That is where she met the dashing Carver C. Joyner. It was love at first sight and they married in 1950. Carver was a graduate of Hampton Institute (University) with a degree in chemistry. He and Olivia moved to New Jersey where employment for a young black chemist was more readily available. Carver became employed by Schering Plough Inc. (now called Merck) as a pharmacological chemist. While Olivia, became a housewife and mother to Carver Jr. Carver’s son from a prior marriage. Two years later Olivia and Carver gave birth to Denise and the following year Michael. Several years later Wendell was born. With four children, Olivia was a happy homemaker. She loved children. She held down the fort at home while Carver went to law school at night to become a Patent Attorney for Schering Plough. Olivia and Carver lived in “The Square” in Springfield, NJ for nearly 20 years. They enjoyed the quiet suburban life. Olivia was a member of First Baptist Church in Cranford; were she sang in the church choir. She especially loved the Christmas programs where she sang Handel’s Messiah and Bach’s Cantatas. She learned to love classical music at a young age from her father who was a professional singer. He sang tenor for the Hampton Institute (University) Quartet. Her family was the first one on the block to have a radio. She got to hear her father’s singing, broadcast from overseas. After living in New Jersey for more than 30 years, Olivia and Carver retired and moved to Chesapeake, Virginia. Olivia loved being back in Virginia with her family and childhood friends. After Carver passed away, she shared her house with Winfield, her older brother who retired from working in NYC. Olivia was a member of Emanuel AME Church in Portsmouth VA. In 2006, Olivia moved back to New Jersey to live with her daughter, son-in-law and grandson so she could be close to her son, Wendell. She remained there for 15 years before moving into an Alzheimer’s nursing facility two-and one-half months ago. Olivia was a member of Elmwood United Presbyterian Church in East Orange, NJ. Olivia is preceded in death by her husband, Carver C Joyner; her sons, Michael Joyner and Carver Joyner Jr.; her brothers, Wendell Creekmur, Allen Creekmur, Winfield Creekmur, brother/cousin Henry Southall; her sisters-in-law, Mildred Creekmur, Mary Smith, Betty Wilson, Mildred Southall and brother-in-law, Edward Smith. She leaves behind her daughter, Denise Joyner West; her son Wendell Creekmur Joyner; son-in-law, Alfred West, her granddaughters Candace Moody, Michelle Joyner, Tasha Joyner and Dominique Joyner; her grandsons, Justin West, Josiah Joyner; great grandchildren, Totiyanna Joyner, Shontele Madison, Kamal Knight, Jr, Clavone Joyner, Kyle Joyner, Kyndle Joyner; two great great grandsons, Cayden Jones, Mason Jones; her nieces, Ann Vaughan, Pamela Southall, Pat Smith; grand nieces, Pamela Carmen, Patricia Vaughan; grand nephews, Greg Vaughan, Kevin Vaughan; plus many more relatives and friends. Olivia lived a long story book life. She met her prince charming and went off to live happily ever after. Funeral Services to be Annouced Metropolitan Funeral Service 5605 Portsmouth Boulevard Portsmouth, Virginia 23701 Telephone 757-628-1000 Even during times of social distancing, anyone who has suffered a loss deserves love and support more than ever before. Let the family know you care by leaving treasured memories, thoughts and prayers on the Tribute Wall.

The family of Olivia Margarite Creekmur Joyner created this Life Tributes page to make it easy to share your memories.

Olivia M Joyner transitioned into her eternal life on July 4,...