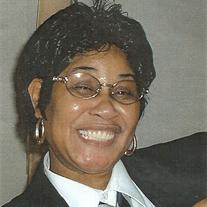 Nellie S. Chance was born March 16, 1955 in Sumter, S.C. to the late Karo Simon Sr. and Marie Simon. Reared in South Carolina for 17 years, she relocated to Paterson, N.J. where she resided for 39 years. She was employed by Allied Security for... View Obituary & Service Information

The family of Nellie Chance created this Life Tributes page to make it easy to share your memories.

Send flowers to the Chance family.