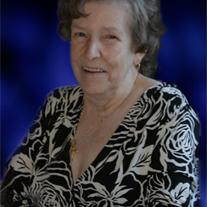 Mary Williams Mardini August 16, 1945 – May 10, 2010   PATERSON – Mary Williams Mardini, nee Mary Hines, 64, of 70 Dey Street, died Monday, May 10, 2010, at St. Joseph’s Hospital. A native of Paterson, Mary was a daughter of the late John and Magdalena Hines, and sibling of Frank, Diane, John, Chris, Laura, and Chuck, and special sister Amy. She was the loving mother of Roxanne, Ramon, Lisa, special daughter Denise, and loving mother-in-law to Papo and Ricky. She was the loving grandmother to Eric, Jo’Nese, Tiffany, Erica, and Emanuel, special grandchildren Jennifer and Christopher, granddaughter-in-law Janet, and countless family, friends and loved ones. Mrs. Williams, also known as "the Getty Grandma", was a Licensed Practicing Nurse and worked at St. Joseph’s Hospital and Greystone Park Psychiatric Hospital. For over 20 years, she proudly worked as a waitress for landmark Paterson restaurants, including the now defunct Madison IV, and most notably, at The Getty Grill. She earned her nickname, "Grandma", from the many customers whom she took care of every night at The Getty Grill. With a razor-sharp wit and an unmatched sense of humor, she was able to dish out discipline to anyone who acted out, all while making everyone laugh. Viewing will be from 6:00 to 7:30pm on Thursday at Scillieri Funeral Home. In lieu of flowers, memorial donations may be sent to the American Society for the Prevention of Cruelty to Animals (ASPCA), via http://www.aspca.org/donate.

The family of Mary Williams created this Life Tributes page to make it easy to share your memories.

Send flowers to the Williams family.