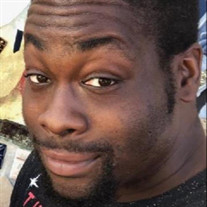 Funeral Service will be Live-Streamed on Thursday, September 30, 2021 - 11:00 AM EST. Visit the Tribute Wall above to view the Live/Recorded Webcast. On September 19, 2021 our Lord and Savior Jesus Christ wrapped his loving arms around our beloved Marques Lettsome as he transitioned into the heavens. A realm where he will be free from the burdens of life and gain the wings to guard, guide and protect those he loved as he always had. Marques was born on August 13, 1985 to Christina Wilson and Conrad Lettsome he was the eldest of their union. However, he was the middle child of his two siblings Joakima Lettsome and Conrad Lettsome Jr. Our gentle giant, with his height, size and strength, was an excellent candidate for many sports, but would not dare risk innocently hurting someone. While he had no biological children, he loved kids and aspired to one day be a father of three, with lots of dogs living in the country where he could grow his own crops to feed his family. He was a foodie to say the least, he loved cooking, and trying new foods, anytime he made a dish he wanted everyone to try it. With Marques around there was never any leftovers, nor was there ever a dull moment. He had a pure and young heart, always laughing and smiling despite his inner feelings. His smile was infectious; it brought joy to many. Marques certainly marched to the beat of his own drum. His entrepreneurial skills and friendliness led him to start "1331 Productions" a videography and production company that allowed him to caption the scenic moments. His love for his friends and family was the epitome of true love. He often referred to his mother as Earth. His natural and truest habitat, his safe place. His most shared memory with her is one we can all appreciate, him being her first born, welcoming her to motherhood. We all know Marques loved being first in anything he did, this was just the beginning of his winning streak. Marques bragged about his father, outside of his love for sharing recipes and entrepreneurial and vacation ideas he admired his father’s tenacity. He shared how his father’s change in eating habits inspired him to do the same. His most cherished memory is of his father cutting up an apple for him using his pocket knife. Because of this, he refused to eat an apple his daddy didn't cut. Marques leaves behind to cherish his memories, his Mother Christina (Steve) Wilson, Father Conrad (Sheila) Lettsome, Sister Joakima Lettsome, Brother Conrad (Shatera) Lettsome. Maternal Grandparents, Merlina (Clinton) Madden, Eric (Gladys) Johnson. Paternal Grandparent, Dorothea Lettsome, and his companion Emily Ilva. Along with a host of loving family members such as, Aunts, Uncles, Nieces, Nephews, Cousins and tons of friends who became family. Father God, we thank you for giving us 36 wonderful years with such a beautiful soul. While we don’t fully understand, we know that all things work together for good for those who love you and are called according to your purpose. We trust and believe that your holy spirit will comfort us in our time of need. Continue to guide and protect us, as you have always done. Thank you, for stepping in and being a shelter in the time of the storm. Even during times of social distancing, anyone who has suffered a loss deserves love and support more than ever before. Let the family know you care by leaving treasured memories, thoughts and prayers on the Tribute Wall.

Funeral Service will be Live-Streamed on Thursday, September 30, 2021 - 11:00 AM EST. Visit the Tribute Wall above to view the Live/Recorded Webcast. On September 19, 2021 our Lord and Savior Jesus Christ wrapped his loving arms around our... View Obituary & Service Information

The family of Marques Lettsome created this Life Tributes page to make it easy to share your memories.

Funeral Service will be Live-Streamed on Thursday, September...

Send flowers to the Lettsome family.