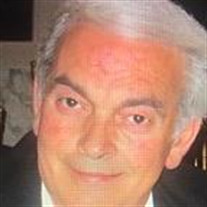 Juan's favorite color was blue, not just any blue, but the colors of the harbors in Ribeira, and the seas where his father juan had worked in all parts of the world. Growing up with his mother Dolores and his brothers Jose and Luis in Artes gave him a love for the country. But he made his mark early becoming a radio technician at the age of 15, and worked the big boats in Spain until coming to America in 1972. Starting a new life there he met his wife Sally, and married in the very next year, 1973, honeymooned in a cabin deep in the woods of Vermont, and settled in Paterson New Jersey fathering a son Johnny and a daughter Eliza, and also founding a precision metal manufacturing company, Galicia Metal Inc. The business prospered and was hard work, but Juan always had time for his family. Coming home from work to sit down at the table for lunch and dinner every day. Each summer he closed the business for six weeks to enjoy times with his whole family, and friends at the house in Spain, which he had designed and constructed himself by the time he was 30 years old. A life built on hard work, family, and friends spanning the 3,282 miles from Paterson to Galicia,Spain. We will miss him, and the love he gave, and inspired within us all. He was a leader in the community, and a former president of the Espanol y Portuguese Club in Paterson, NJ. He leaves behind his beloved family, and will always be in the thoughts of his devoted wife Sally, son Johnny, daughter Eliza and Christian Roesch. A loving Mother Dolores, brother Jose and wife Lola, younger brother Luis, mother-in-law Isabel Carrizo, sister-in-law Alicia and Kevin DiCamillo, nephews Jose and wife Silvia, Javier, Gabriella, Agnus, Giovanni, Lia and Vera. Many loving uncles and aunts in Galicia, Spain. Predeceased father Juan and brother Manuel, father -in-law Jose and brother-in-law Pepe. Affectionately loved by Alexander Roesch and Loarte Polanco.  In lieu of flowers for donations to be made in honor of Juan Martinez at the Gilda’s Club NY: https://gildasclubnyc.org/donate-now/ Gilda’s Club NYC Attn: Development 195 West Houston Street New York, NY 10014

Juan's favorite color was blue, not just any blue, but the colors of the harbors in Ribeira, and the seas where his father juan had worked in all parts of the world. Growing up with his mother Dolores and his brothers Jose and Luis in Artes... View Obituary & Service Information

The family of Juan M. Martinez created this Life Tributes page to make it easy to share your memories.

Juan&#39;s favorite color was blue, not just any blue, but the colors...

Send flowers to the Martinez family.