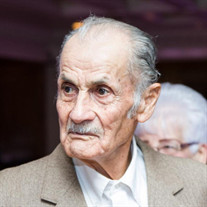 Scillieri-Arnold Funeral Home requires all to wear a mask and practice social distancing as per COVID-19 guidelines. Funeral Service will be Live-Streamed on Wednesday, February 17, 2021 - 5:00 PM - 7:00 PM EST. Visit the Tribute Wall above to view the Live/Recorded Webcast. Jose Marcelino Toledo Casanova, age 90, passed away peacefully on Monday February 8th, 2021, at St Joseph’s Hospital in Paterson. He was born February 28, 1930, in Manati Puerto Rico, to Jose and Francisca (Casanova) Toledo. He was part of the Infantry Regiment from Puerto Rico known as "The Borinqueneers". He served from 1951-1953 and served in the Korean War, where he was awarded the Korean Service Medal with 3 Bronze Stars, United Nations Service Medal, & Combat Infantry Badge. He married Elba Luz Sanchez on 08/24/1957 in Puerto Rico. Seeking a better life for his family, he moved to Brooklyn, NY and worked as a truck driver. New York was too busy for him, so he made the decision to move to a more quiet area to raise his family, on October 1961 the family moved to Paterson NJ. Jose was as close to a saint as anyone who knew him could get. Words can't express how kindhearted and gentle he was, with an endless list of help he provided his friends, family and strangers. He was a great representation of the teachings of our Lord and Savior Jesus Christ. He had an uncanny ability to reach people in a deep and positive way. He is survived by his wife Elba L. Toledo, Sons (Jose, Adalberto, Juan, Ricky) Daughter (Annie) and multiple grandchildren, nieces, nephews and cousins. Interment: Puerto Rico National Cemetery Bayamon, Puerto Rico Even during times of social distancing, anyone who has suffered a loss deserves love and support more than ever before. Let the family know you care by leaving treasured memories, thoughts and prayers on the Tribute Wall.

The family of Jose Marcelino Toledo Casanova created this Life Tributes page to make it easy to share your memories.

Scillieri-Arnold Funeral Home requires all to wear a mask and...