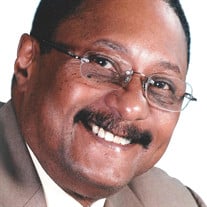 Johnnie Lee Tyson, affectionately known as John, was born on June 4, 1944 to the late Joseph Willie Tyson Sr. and Willie Mae Tyson (Woodard) in Greenville, NC. He was educated in the Greenville, North Carolina school system during his early years. He graduated from North Carolina Central University (NCCU) with a dual bachelor’s degree in Biology and Chemistry. He also holds two masters’ degrees in education and school administration. During his university years, John became a member of the Omega Psi Phi fraternity. John served his country in the US Army between the years of 1968 and 1970. As part of his military service, John did a tour of service in Vietnam. John was employed by the Paterson Public School System as a teacher, principal and public-school administrator for over 35 years. He retired from the Paterson Public School System in 2007. He was a mentor and role model for many young people in the Paterson community at large. John was united in holy matrimony to Mary Jo Lewis on November 17, 1988 in the city of Paterson. They were blessed with 3 children, Javanda T. Tyson, Tiara E. Tyson and John Zachary Tyson. John was very family-oriented and his family was always of upmost concern to him. John was a dedicated and committed husband, a phenomenal and caring father, and exceptional grandfather (Papa). He will be remembered for his continuous generosity and loving kindness to so many throughout his life and he will be profoundly missed by all those who loved and knew him. John was preceded in death by his father, Joseph W. Tyson, Sr.; his mother Willie Mae Tyson (Woodard). He is survived by his wife Mary Jo Lewis-Tyson of Paterson, NJ;, 2 daughters Javanda T. Tyson and Tiara E. Tyson of Paterson, NJ and 1 son John Zachary Tyson of Miami, FL; 2 grandsons Drew Tyson and Dallas Tyson; 2 brothers Joseph W. Tyson Jr. (Dororthy) of Glen Ridge, NJ and Andre Tyson of Valencia, CA; 1 sister Gloria Tyson of Paterson, NJ; 1 brother-in-law Ronald Lewis (Dorothy) of Paterson, NJ; 1 sister-in-law Debbie Lewis of Paterson, NJ; 3 nieces, Morgan Williams, Taylor Williams of Paterson, NJ and Darla Ward of Hamburg, NJ and 6 nephews, Vincent J. Gilbert Jr. of Wallington, NJ, Ronald Lewis Jr. of Lodi, NJ, Andre Lewis, Jordan Lewis, Kyle Lewis and Tonie Lewis, all of Paterson, NJ.

Johnnie Lee Tyson, affectionately known as John, was born on June 4, 1944 to the late Joseph Willie Tyson Sr. and Willie Mae Tyson (Woodard) in Greenville, NC. He was educated in the Greenville, North Carolina school system during his early... View Obituary & Service Information

The family of Johnnie Lee Tyson created this Life Tributes page to make it easy to share your memories.

Johnnie Lee Tyson, affectionately known as John, was born on...

Send flowers to the Tyson family.