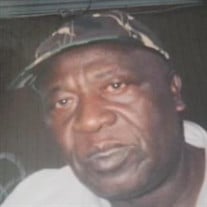 John J. Mckenzie (Junior), of Lake City, South Carolina passed away on Wednesday May 19th, 2021 after reaching the age of 82 years old. After months of failing health, he died peacefully at St. Joseph Hospital alongside family. John J. Mckenzie was born on June 3rd, 1939 in Lake City, SC to Janie Dell Cooper Mckenzie and John William Mckenzie. As a boy he loved to go fishing and work on cars. As a very young man he learned to work hard and to take on whatever job was available to support himself. He worked in construction for 30 years and was known to work on cars from time to time. In 1958, he married Hessi Shaw. They would have two daughters Marsha Mckenzie and Nadine Mckenzie. In August 1959, they would move to New Jersey where John worked in Construction helping build major highways and many structures. He came to know Jesus Christ and dedicated his life to God and would live the rest of his life as a Christian. He believed in the resurrection of Jesus and told others about God’s Kingdom. He attended St.Luke Baptist Church for many years. John loved music and sang on the mens choir at St.Luke Baptist Church. Boxing was his one true sport. He loved to watch and even talk boxing with friends and family. He loved to be with family and was always up for a picnic, reunion or gathering of friends. He was a strong patriarch of his family, a good friend to all, a man who would give his shirt for a friend. He was a good father who always took care of his children and did the best he could to teach and guide them, a loving grandfather and “great-grand” father to many. John was a strong, proud and good man. He is loved and will be missed by many! He is preceded in death by parents, John William Mckenzie, Janie Dell Cooper Mckenzie, Siblings; Rickle Mckenzie, Willie William Mckenzie, Eva Mckenzie, Gerchue Patty Mckenzie, Lillibelle Blossom Mckenzie, Elizabeth Mckenzie, Estell Mckenzie, Blondie Barrier Cooper children; Nadine Mckezie, Sherry Mcclam and Toby Davis. Mr. Mckenzie is survived by wife, Hessie Mckenzie of Lake City ,SC; Children, Marsha Mckenzie of Paterson, NJ, Donna Bragg of Paterson, NJ, Johny Bragg of Paterson, NJ and Travis Davis of Paterson NJ, William Bragg of Paterson, NJ, Linell Bragg Bridgeport CT, Linda Mcclam, Paterson NJ,Sheila Mcclam Paterson NJ; Son In Law William Baker; Step Children; Tracy Gray, Union SC, Zena Bragg, Rocky Mount NC,George Bragg Paterson NJ, James Gray Fairlawn NJ,Paula Brown Nanuet NY; 20 Grandchildren; 28 Great Grandchildren; 14 Great Great Grandchildren. Even during times of social distancing, anyone who has suffered a loss deserves love and support more than ever before. Let the family know you care by leaving treasured memories, thoughts and prayers on the Tribute Wall.

The family of John J. Mckenzie created this Life Tributes page to make it easy to share your memories.

Send flowers to the Mckenzie family.