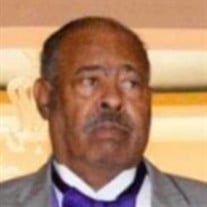 Joe Pierce Sr. passed away peacefully at Kindred Hospital in Passaic, N.J on May 7, 2022 and transitioned to his new home not made by man. Joe Pierce Sr. was born in Henderson, North Carolina on November 11, 1940, to the late Marie and Junious... View Obituary & Service Information

Joe Pierce Sr. passed away peacefully at Kindred Hospital in...