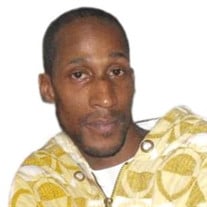 Jareau E. Deas (Rocky) was born on March 20, 1978, the third child to the late Jerome and Eloise Deas. He entered into eternal rest on Sunday, May 8, 2022 in Wayne New Jersey. Jareau accepted Christ at an early age where he attended New A.M.E.... View Obituary & Service Information

Send flowers to the Deas family.