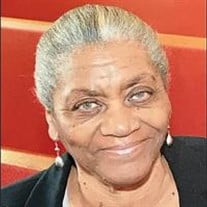 Jacqueline McMikle was born May 1, 1945 in Camden, AL to the late Lela M. Wright and George W. Savage. She was raised by her aunt and grandmother, Bertha and Ola M. Martin. She was preceded in death by her Children; son Dwight and Daughter Denise; Sisters: Helen and Carolyn Martin; Brothers: Michael Martin, Randolph, Howard and Melford Wright. She received her formal education in Camden, Alabama. She resided briefly in Queens, NY before moving to Paterson where she connected with the family she grew up with. She was employed for over 25 years at North Jersey Development Center in Totowa, NJ where she held the position of Transportation Agent. She confessed Christ at an early age and joined St. James A.M.E Church, Camden AL. After moving to Paterson she joined First A.M.E Zion church, where she served as an usher and a member of the Stewardess board. Jacqueline was a person who had the ability to bring joy into the lives of those she was fortunate to meet, however, Jacqueline was forced to deal with much heartache within her time on earth that many of us have not seen and pray we never will. The death of her children profoundly impacted Jacqueline, and those who were closest to her were always aware that while she may have always appeared to be smiling and upbeat, her beautiful eyes told a different story. They always reflected a deep sadness and sorrow for the children she lost much too early in life as well as the many other burdens she carried that troubled her throughout her lifetime. For those closest to her, we would like to believe that things were resolved upon her death. Although Jacqueline had troubles like so many of us do, she did not let that stop that from showering her immediate family and those whom she loved, with an unconditional love that will be felt throughout the remainder of our lifetime. Jacqueline showed that love from what she did best “Cooking”! There are not enough words in the English language that can convey the passion, pride, and love that Jack put into her cooking. These things were her best secret ingredients. Jacqueline, had a way of creating new dishes and enhancing old familiar dishes that made her family travel over state lines as well as argue who would get the last piece, scoop, slice, etc. of anything she made. She truly showed her love, devotion, and commitment to her family and others through the many meals she prepared both in times of sorrow as well as celebration. It must also be noted, that God recognized Jack’s hardships in life and not only rewarded her with a family that will continue to love her until our departure on this earth and beyond, but also saw fit to give her the gift of another chance of maternal love. Ameer Griffin was born on her birthday that she loved as deeply and equal as any child of her own. While we all sit with heavy hearts with the loss of someone that will never be replaced, we are comforted in knowing that Jacqueline McMikle is in a place of love reunited with those who left us much too early, and she knows that the love she showered upon us during her time on this earth will reinforce us as a family and help us understand that while we are all not perfect we simply do the best we can. She leaves to cherish her memories: sisters, Elsie L. Pritchett, Brenda (Arnold) Easton, Celeste Martin, Mary Wright; brothers Clarence Martin, and Anthony Wright, as well as a host of nieces, nephews and other relatives and friends.

Jacqueline McMikle was born May 1, 1945 in Camden, AL to the late Lela M. Wright and George W. Savage. She was raised by her aunt and grandmother, Bertha and Ola M. Martin. She was preceded in death by her Children; son Dwight and Daughter Denise;... View Obituary & Service Information

The family of Jacqueline McMikle created this Life Tributes page to make it easy to share your memories.

Send flowers to the McMikle family.