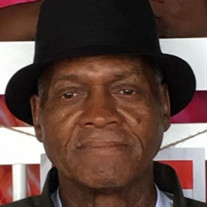 Funeral Service will be Live-Streamed on Thursday, September 2, 2021 - 07:00 PM EST. Visit the Tribute Wall above to view the Live/Recorded Webcast. Henry Hunter Hardison, nicknamed Jack, was born May 23, 1940, to the parents of Edward and Ruth Hardison in Greenville, North Carolina. He was one of nine children -- three brothers, five sisters. On August 25, 2021, GOD called Jack home to be with HIM and our Dear LORD and SAVIOR JESUS CHRIST. Henry and his wife Mollie moved from Greenville to Paterson, New Jersey in 1962. He spent most of his 81 years living in Paterson; that’s where they raised and loved their family. With little education, Henry always kept a job and prided himself on all the jobs he worked. Sometime in the 1970s, he began working at Chem Spray, in Totowa, New Jersey, as a fork-lift driver. He did that for many years. He later worked as a packer at Globe Products in Clifton, New Jersey; and in 1985 began a 30-year career working at Nabisco in Fair Lawn, New Jersey. He retired in 2015. Henry excelled in auto repair and loved working on his cars, especially the Buick 225 also known as the “deuce and a quarter.” He owned a total of three throughout his early life. He loved playing Pick 3 and Pick 4 lottery tickets in New Jersey and would often drive to the state of New York to play. Henry had an extremely weird and complicated system for playing those lottery games but he won and won a lot. Many times he tried to show his son Vincent the secret...but Vincent was never able to crack the code. Henry was a very low-key, laid-back type of man. His children learned at an early age not to spend money on birthdays, Father’s Day or Christmas because Henry -- always appreciative, always grateful -- was not thrilled about receiving gifts. Finding a picture of Henry was extremely difficult because he not only did not like taking them, but taking pictures gave him nightmares. Henry was preceded in death by three brothers: Edward Hardison, James Tony Hardison, Linwood Hardison; and four sisters: Isabell Cates, Louise Daniels, Nancy Hardison, Ruth Reddick. Henry is survived by his sisters Ramona Hardison and Carolyn Jean Laughinghouse; his brother Curtis Barnes; wife Mollie Hardison; three children: Tawana Kay Hardison (affectionately called by him Tee Wana) the eldest; Vincent Hardison (affectionately called by him Head) the middle child; Pamela Hardison (affectionately called by him Poo Poo) the youngest; two grandchildren: Jamal Williams (affectionately called by him Jumale) the eldest; and Khadijrah Beach (affectionately called by him Dee jah); three great grandchildren: Ja’ciere Williams (aka Jaja); Anavi Williams (aka Navi); and Leon Kevin Toulson (aka Buggy), Titan Dior Smalls. A host of loving family and friends shall miss Henry deeply. Even during times of social distancing, anyone who has suffered a loss deserves love and support more than ever before. Let the family know you care by leaving treasured memories, thoughts and prayers on the Tribute Wall.

Funeral Service will be Live-Streamed on Thursday, September 2, 2021 - 07:00 PM EST. Visit the Tribute Wall above to view the Live/Recorded Webcast. Henry Hunter Hardison, nicknamed Jack, was born May 23, 1940, to the parents of Edward and... View Obituary & Service Information

The family of Henry Hunter Hardison created this Life Tributes page to make it easy to share your memories.

Funeral Service will be Live-Streamed on Thursday, September...

Send flowers to the Hardison family.