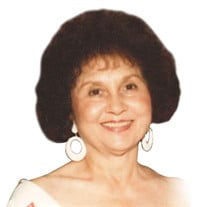 Helen Elizabeth Love, age 99, passed away peacefully on October 1, 2019 due to congestive heart failure. She was born on July 11, 1920 in New York City to James Love and Sophie Williams but moved to Hackensack, New Jersey as a young child, it was there she was raised. Helen moved to Englewood, New Jersey after her marriage to Frank Clark in 1940, where she would raise eight children, five girls and three boys. In 2005 Helen moved to Lodi, New Jersey. Though Helen never remarried after she and Frank divorced in 1967, she adored the company of Edward Brown, her companion for nearly 40 years, who preceded her in death in April 2015. Helen was always concerned with her appearance and attended the Ophelia-Devore School of Charm and graduated on Sept 25, 1959. She never left home without making sure she was well groomed, always looked stylish, and taught us the importance of a good appearance. She enjoyed crocheting, crossword puzzles, coffee ice cream at bedtime, the New York Knicks and the Mets. She was kind, generous with a giving spirit, and over the years her hospitality was shown to all. She was a wonderful housewife and homemaker, and it was apparent to all when they would visit her neat and orderly home. As far as living healthy she was ahead of the times, she never smoked, drank and always was conscious of a good diet, which unquestionably helped to attribute to her living to be nearly 100 years old. All could learn from her dignified way of dealing with the untimely loss of four children. Helen is survived by four of her eight children; Marcia Clark, Helen Isley, Frank Clark and Kelvin Clark; grandchildren, Travis Harris, Sonja Harris, Lewis Harris Jr., Tracey Bradden, Douglas Isley, Frank Isley, Richard Champion, Michelle Champion and Mark Champion; first cousins, Roland Williams, Garry Jones and Delores White; a nephew, Rory Graham and her many great grandchildren and great, great grandchildren. ‘There is a hope that was shared with Mom, and it had to do with what the Bible refers to as the enemy. At 1 Corinthians 15:26 it says, “And the last enemy, death, is to be brought to nothing.” God’s word, the Bible, also offers hope for us with the future promise given as stated at Revelation 21:4, where it says, “And he will wipe out every tear from their eyes, and death will be no more, neither will mourning nor outcry nor pain be anymore. The former things have passed away.”’ ‘Our mother, family relative and friend will be missed, but the pleasant thoughts of her will continually live on in our hearts and minds.’

Helen Elizabeth Love, age 99, passed away peacefully on October 1, 2019 due to congestive heart failure. She was born on July 11, 1920 in New York City to James Love and Sophie Williams but moved to Hackensack, New Jersey as a young child,... View Obituary & Service Information

The family of Helen Elizabeth Love created this Life Tributes page to make it easy to share your memories.

Send flowers to the Love family.