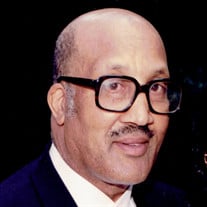 Funeral Service will be Live-Streamed on Friday, January 7, 2022- 6:00 PM EST. Visit the Tribute Wall above to view the Live/Recorded Webcast. Father Jerry W. Diggs was born in Piney River, Virginia on June 3, 1936 to the late Retha and Benny Diggs. He was one of two children blessed to this union. On December 21, 2021 in the comforts of his home surrounded by his family Jerry transitioned to his new home not made by man. At a young age he traveled to Montclair, New Jersey with his family. Jerry attended the Montclair Public School system. During his time in the Montclair School System, Jerry enjoyed playing sports and was active in basketball and track and field. In 1961, Jerry met the love of his life, Anna Brown. After a brief courtship, they were married on February 25, 1961 and enjoyed a wonderful life together for more than 60 years. To this union they were blessed with two sons, Jerry and Thaddaeus Diggs. Jerry had an affinity for music and would often sing his versions of popular songs. He was a strong family man that took great joy in raising his two children. Jerry was very active in introducing his sons to athletics at a very young age that began with involving both of them in the Lou Costello Boxing Club located in Paterson, New Jersey as well as the Montclair Cobras Youth Football Program and the Montclair Township Baseball Program. He also was very devoted to sharing his knowledge and wisdom frequently with his grandchildren. Jerry was employed by the Township of Glen Ridge, Department of Public Works, where he retired in 1996 after 25 years of service. He enjoyed a rich retirement life which included traveling to many places. Specifically, he enjoyed visiting the Native American Reservations. Jerry became a member of The Universal Hagar’s Spiritual Church in 1961 and was a faithful active member until his transition. He worked diligently to support the church and was a member of the Deacon’s Board, a graduate of the Hagar’s School of Mediumship and Psychology, served as the State Father of New Jersey, a Sunday School Teacher, and volunteered his time as the groundskeeper and general maintenance person. He was a member of Chapter #6, Knights of the All Seeing Eye in Hackensack, New Jersey where he held the offices of Inner and Outer Sergeant. He was predeceased by his wonderful parents, sister Belle Virginia Rose and brother in-law Isaac Rose. He will live in the hearts and minds of those he loved and those that loved him; his loving wife, Reverend Anna Diggs, children, Jerry L. Diggs and Thaddaeus L. Diggs, daughter in-laws, Shelia Walker-Diggs and Dale Coleman-Diggs, grandchildren Dominique Diggs, Tyler Diggs, Briana Diggs, and Jordan Diggs, beloved nieces Anita Veal and Retha Rose-Arnold, nephews, Donald Rose and Sam Arnold, long-time friend Harold Debnaum and a host of other loving relatives, The Universal Hager’s Spiritual Church family and friends. In lieu of flowers, please make all donations to and mailed to Universal Hagar's Spiritual Church 180 Clay Street Hackensack, N.J. 07601.  For more information please contact the church directly 201-343-6133. Even during times of social distancing, anyone who has suffered a loss deserves love and support more than ever before. Let the family know you care by leaving treasured memories, thoughts and prayers on the Tribute Wall.

Funeral Service will be Live-Streamed on Friday, January 7, 2022- 6:00 PM EST. Visit the Tribute Wall above to view the Live/Recorded Webcast. Father Jerry W. Diggs was born in Piney River, Virginia on June 3, 1936 to the late Retha and Benny... View Obituary & Service Information

NOTE - Masks are still required to enter the Funeral Home.

Send flowers to the Diggs family.