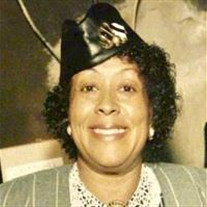 Ella Louise (Wheeler) Palmer, affectionately known as “Miss Ella”, transitioned to greatness on Monday, February 5, 2018. She was born in Camden, SC to Eugene Bossy Wheeler and Ella Mae (Mitchell) Wheeler on October 3, 1942. The family relocated to Paterson, NJ when she was the tender age of 5, and she grew up on Holsman Street. Her K-8 education was at School #12 and she went on to attend Central High School where she was the first African-American Majorette and Captain. After graduation, Ella went to the Paterson Business School. In 1961, Ella married Harold L. Quackenbush, and from that union was born Yvonne E. and Stephanie L. Quackenbush. Ella and Harold divorced in 1970 and she entered into a second marriage to William G. Palmer in 1972. This union blended two families to include Sharon L (Palmer) Taylor and Sheryl L (Palmer) Coe. Ella had an impeccable work ethic that began early in life. While in high school, she worked at a store near her home, and then at Mac’s Grocery Store which was located on the corner of Governor and Straight Street. After completing her course work at the Paterson Business School, she was hired as an office clerk at Crazy Horse and during the 25 years of her employ, she steadily moved up to become its first woman and first African-American Comptroller and Executive. She was also the Night Store Manager at Alexander’s Dept. Store in Paramus, NJ for 5 years during which time she afforded employment to young men and women from Paterson. In 1994, Ella began a new career at Barney’s NY’s Lyndhurst Corporate Offices as its Foreign and Domestic Accounts Payable and Receivables Manager where she remained until retirement. Ella made it her business to employ POC, and pressed the issue of diversity and equal pay to her employers. She encouraged POC to go for their dreams regardless of how hard it may be. She also understood the value of her staff and to show her gratitude, she got up an hour early every morning to purchase coffee and bagels or donuts for the entire office, never missed any of her peers or employees special events and stood by them during tragedies/illness. She shared wonderful personal relationships with them all and inspired many. Although Ella loved her work, she strongly believed in entrepreneurship, so in 1979 she purchased what was to become one of Paterson’s most beloved night clubs, E&J Lounge. Ella also understood the importance of giving back to the community and made it a priority. She faithfully supported various community organizations, gave away baskets to the needy and toys to neighborhood children during the holiday. She founded and sponsored the E&J Lounge Softball Team and the E&J Lounge bowling league for her patrons which created a love of the sport for many. Ella also opened a tax office with her beloved daughter Yvonne for a short time. She was a licensed realtor and worked at Ella Fitzgerald Realty in the 1980’s and a licensed Notary Public. Ella was a “Jack of All Trades”, and her family jokingly called her “Barbara (Bob) Villa”. She could lay tiles, hang wall paper better than a professional, fix almost anything, loved to garden, cook, sew—there wasn’t much she couldn’t do and if she couldn’t, she would learn and master it! She was also known for her million dollar smile and her sense of style; no one wore a hat like Ella! She was the consummate lady and had a heart of gold, with an ear to listen and a shoulder to cry on. She was a mother/sister/aunt to many, and would help anyone in need if at all possible. She laughed and cried with the same passion because she took everything to heart. She saw the best in people and helped them to see it in themselves. Ella’s pride and joy was her family and if she could, she would have spent every moment with them. As the oldest of 8 children, she was fiercely protective, and it remained so her entire life. She adored her “girls”, grand/great grandchildren, parents, siblings and her “Big Momma”. She commandeered most of the family get-togethers, and made sure that we never lost touch with one another. She lived life to the fullest and is loved by all that had the pleasure of knowing her. Ella’s GrAndCestors: Daughter, Yvonne E. Palmer; Parents, Eugene Bossy and Ella Mae Wheeler; Two Brothers, Eugene and Jesse L. Wheeler; Sister, Mary L. Wheeler; Grandmother, Dina Mitchell; Special Aunt Geraldine Chestnut; Mother-in-Love Carrie L. Wilson; and Nephew Tahbiti Khalfani Wheeler. Ella’s Legacy Bearers: Three Daughters, Stephanie L. Quackenbush-Brown(Dwayne), Sharon L Taylor, and Sheryl L. Coe; Eight Grandchildren, Brandon, Marcus and Tamara Palmer, Tangy Cordrey, Johnny McQueen, Tarez Taylor Ridgway, Nicole Taylor, and Dabarr Jones; Two Sisters, Elaine Palmer and Andrea Wheeler-Kinion (Rayshawn); Two Brothers, Larry (Yvonne) and John Wheeler; Eleven Nephews and Nieces, Eugene M. Wheeler, Lamont Wheeler, Yvette Wheeler, Charlinda Wheeler, April Wheeler, Maurice Wheeler, Larry Wheeler, Jr., Lanice Wheeler, Iasha K. Harris, Zaire A. Harris, and John Wheeler, Jr; Seven great-grandchildren and a host of great nieces, nephews, cousins, family and loving friends. In Lieu of Flowers please make all donation: Dementia Society of America - Dementiasociety.org/donate

The family of Ella L Wheeler Palmer created this Life Tributes page to make it easy to share your memories.

Send flowers to the Palmer family.