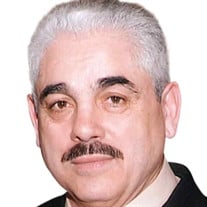 On November 22, 2020 God gently wrapped his arms around Efrain Toledo and escorted him to a new home not made by man.  Efrain Toledo was born on March 29, 1947 in Manati, Puerto Rico to David Vincent Toledo and Daniela Reyes-Toledo. In the early 60s Efrain relocated to Paterson, New Jersey. There he met the love of his life, Ruth Celia Cruz, whom he married on November 20, 1965. To this union were born Edward Toledo, Efrem (aka Frankie) Toledo, Jacqueline Toledo and David Toledo. Efrain, was a lover of sports.  At an early age his first love was baseball which he played through his young adult years, until realizing that he was too short to make it to the pro leagues. Soon enough he crossed paths with a sport that didn’t require a specific size. Instead it is strongly desired for hard work and dedication.   Efrain never competed but was still a true champ ! In the boxing community he was a leader to many. He took kids off the rough streets and into a gym. Efrain showed a number of people how to defend themselves. He also gathered local businesses to raise money in support of the boxing dreams of children who could not afford to.  As a trainer, Efrain was known for being firm but well respected. From the words of one of his golden and diamond glove winners, "He believed in me when not even I believed in myself and by his side I won He always told me no matter what others say about you, just know I am here in your corner" By his mid-forties, Efrain had a long list of successful fighters under his belt, including two of his sons who held the IBF and WBU World Championship titles. The love of boxing was passed down to the next generation. Efrain got the chance to be in the corner of three of his grandkids. One of them went on to win a National Ringside Tournament. Efrain leaves behind a boxing legacy.  Efrain is survived by his loving wife of 55 years, Ruth; his sons Edward (Wanda); Efrem (fiancé Josephine); David (Wife Ramonita) and daughter Jacqueline. One sister, Maria Toledo, four sister in laws; four brother in laws; eight grandchildren; five great grandchildren, along with a host of other relatives, friends and his base endless boxing community. Efrain, was predeceased by his brothers Olvin Toledo and Hector Toledo. If you were ever to come across anyone who knew Efrain, you were guaranteed a smile and positive words. He was a caring mentor and true family man. Efrain will be dearly missed.   Even during times of social distancing, anyone who has suffered a loss deserves love and support more than ever before. Let the family know you care by leaving treasured memories, thoughts and prayers in our Online Guestbook.

On November 22, 2020 God gently wrapped his arms around Efrain Toledo and escorted him to a new home not made by man.  Efrain Toledo was born on March 29, 1947 in Manati, Puerto Rico to David Vincent Toledo and Daniela Reyes-Toledo. In the... View Obituary & Service Information

The family of Efrain Toledo created this Life Tributes page to make it easy to share your memories.

Send flowers to the Toledo family.