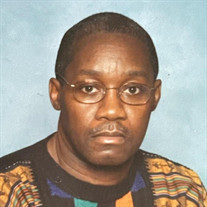 Funeral Service will be Live-Streamed on Saturday, September 18, 2021 - 9:30 AM EST. Visit the Tribute Wall above to view the Live/Recorded Webcast. Clarence Martin was born October 14, 1952 in Camden, Alabama to Bertha Rean Martin. Clarence was called home to be with his Heavenly Father on Friday, September 3, 2021 at St. Joseph's Hospital, Paterson, NJ. Clarence received his early formal education in Camden, Alabama. He later migrated to Paterson, New Jersey where he graduated from J. F. Kennedy High School. He went on to further his education by attending and graduating from Buena Vista College in the Storm Lake, Iowa. He held dual employment at Macy's and Paterson Public Schools for many years. He retired from Macy's in 2008 while remaining employed for over 30 years with the Paterson Board of Education before retiring in 2020. Clarence was a diligent and was well liked employee at Macy's as well as a committed and excellent mentor to the children in his charge at PPS. Clarence confessed Christ at and early age and attended St. James A.M.E. Church in Camden, Alabama. In Paterson he attended Northside Chapel and later joined First A.M.E. Zion church where he remained a loyal and dedicated member until his heavenly transition home. While he was at First A.M.E. Zion Church Clarence was a member of the Stewardess Board and served as its Chaplain, Sunday School and Bible Study. Throughout his life, Clarence was described as a genuinely, kind, and compassionate person, who was always available to go above and beyond to help in any way he could. If a stranger would ask him for a dollar and all he had was a five or more, Clarence would not hesitate to give what he had to that person, monetary value would never interfere with his desire to assist those in need. He was a dedicated servant always ready to lend a hand; serving breakfast to the homeless, handing out food baskets and clothing to the needy and always spreading words of comfort to his family, church family or his community. Clarence was considered shy until he got to know you. He loved to talk, especially about politics and human injustices. He had a keen understanding of what was right and wrong. While Clarence did not have any children of his own, he was viewed affectionately as a paternal figure within his family and that love never wavered, however, it grew deeper with each individual family member as well as the generations of nieces and nephews he helped raise. His family showed his love back by consistently and vigilantly being available for him, whether it be preparing the meals he loved,helping him with his love of gardening, or driving him wherever he needed to go despite the inconvenience that was always viewed with love and humor. He was blessed with a quick and quiet wit and a wonderful sense of ironic humor where he seemed to know more about each of his family members than they would ever know about themselves. It will never be understood what he meant to his family and his presence is something that can never be replaced, overlooked or forgotten. He was a unique man, who respected preserving the memories of those who came before him, keeping the family unit whole despite any problems that they had, and reaming faithful to his upbringing and religious faith. Clarence embodied the strength of a man who was capable, through quiet wisdom and gentleness to positively and powerfully influence his entire family. These precious qualities are something we are sure he hopes will be passed down to not only the male children of his family but his family as a whole in order to respect his memory during his time on earth and beyond. Clarence was preceded in death by his mother Bertha Rean Martin and sisters Helen and Carolyn Martin, Jacqueline McMikle, and brother Michael Martin. He leaves to cherish his memories, sisters, Elsie L. Pritchett, Brenda (Arnold) Easton, Celeste Martin, Nieces: Zena Williams, Ashia Martin, Aisha Chalmers, Jasmine Williams: Nephews, Montrise Williams, Saeed Martin, Omari Easton,Great Nephews: Marcellus Williams, Ameer Griffin, Savion Martin, Great Nieces Jessenia and Jasi Barry, cousin Patricia Fairley and best friends Angela Fraser, Mary Lou Clancy and a host of other relatives, friends and church family. Even during times of social distancing, anyone who has suffered a loss deserves love and support more than ever before. Let the family know you care by leaving treasured memories, thoughts and prayers on the Tribute Wall.

The family of Clarence Martin created this Life Tributes page to make it easy to share your memories.

Funeral Service will be Live-Streamed on Saturday, September...

Send flowers to the Martin family.