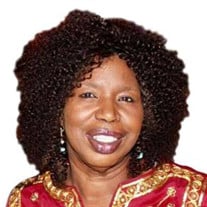 On the evening of February 14, 2019, God called home one of his precious jewels and devoted Christian, Charlotte Williams. She was surrounded by friends and family when she peacefully passed away at Columbia Presbyterian Hospital in New York City. Charlotte was 60 years old. Charlotte Williams was born in Paterson, New Jersey at Paterson General Hospital, on May 12, 1958. She was the daughter of the late Ollie Davis and Charles Hebron. She was one of six children. Charlotte spent most of her life living in Paterson where she attended the Paterson public school system until the eighth grade. After, Charlotte went to and graduated from Passaic County Technical High School. Years later she returned to Tech as a Teacher’s Assistant where she discovered her love of working with students with special needs. Believing that she could do more to impact the lives of the students she worked with and others, Charlotte decided to further her education by earning a Bachelor's Degree in Education with a certification in Special Education from Kean University. Subsequently, Charlotte began her teaching career in Special Education at Passaic County Technical High School in Wayne. From there she went on to teach at Eastside High School in Paterson and finally, East Orange Campus High School in East Orange, until her retirement. Charlotte was a long time member of Christ Temple Baptist Church in Paterson, where she entered into marriage with her husband, Terry Williams, and instilled Christian faith in their three children, Myesha, Tyre, and Bonita. Afterward, she attended St. Luke Baptist Church in Paterson. Charlotte was a strong-willed woman who never allowed others to influence or dictate the course of her life. Even in an attempt to, she would quickly say, in an amusing tone, “I’ll do what I want to do. Your not my God.” Although at times her demeanor was playful, she was outspoken, had a magnetic personality, which drew many to her for advice and comfort or just a kind word or two. Charlotte was an outgoing individual who enjoyed life, meeting people, traveling, and whenever she could, she would make her way to the beach where she felt spiritually connected. For hours she would meditate there, soaking up the sun and admiring the ocean waves. Charlotte had a unique way of touching people's souls and lifting their spirits. When God created Charlotte, he broke the mold. Although it seems as though Charlotte's time with us was short, she lived an abundant life and experienced more than some. Charlotte did not ask for much, she gave true friendship, and she appreciated true friendship from others. Charlotte will be missed by many; we were blessed to have known her and to have had an opportunity to develop a personal relationship that we could cherish. At this time our hearts might be heavy with grief, but as Charlotte sits high and looks down on us, with a subtle smile on her face, she is saying, “Don’t worry about me I will be okay, I am with my Savior.” Rest assure, Charlotte is with her savior doing what she does best, obedient to his words, and talking junk to the angles. Charlotte was preceded in death by Ollie Davis (mother), Charles Hepburn (father), Hubert Davis (brother), Tyrone Davis (brother), and Steven Lucas (brother). Charlotte is survived by her three children, Tyre Davis (Amya Evans Davis) of Japan, Myesha Davis of Paterson, Bonita Davis (Jim Hill) of Hasbrouck Heights; brother, Anthony Davis (Jayme Davis) of Paterson; sister, Reatha Freeman (Bishop Monroe Freeman) of Delaware; six grandchildren, Jacquaa Davis, Myhizjah Davis, Bruce Anderson, Keyurah Smith, Tyre Davis Jr, Takhi Davis; a great-granddaughter, Anastacia Davis; and a host of special friends and relatives.

On the evening of February 14, 2019, God called home one of his precious jewels and devoted Christian, Charlotte Williams. She was surrounded by friends and family when she peacefully passed away at Columbia Presbyterian Hospital in New York... View Obituary & Service Information

The family of Charlotte "Peedee" Williams created this Life Tributes page to make it easy to share your memories.

Send flowers to the Williams family.