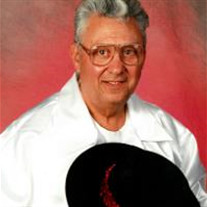 Carmine James Baratta passed away peacefully on Friday August 26, 2017 surrounded by his family. Carmine was born on January 16, 1932 to the late James Leo Baratta and Sadie (Marino). Carmine was raised in Paterson later residing in Garfield and retiring to Manchester Township. Carmine was predeceased by the love of his life, Naomi who passed away on August 13, 2015. When Carmine met Naomi he immediately fell in love while they both served in the U.S. Navy. To this beautiful union four children were born. Carmine was the proud member of The Hawthorne Caballeros Drum and Bugle Corps. Carmine, “Sonny” was a devoted friend to his beloved “gang” of lifelong friends from Riverside: Andy, Richie, Sal and Jose. To his last day, he cherished their friendship. Carmine was the owner of several automobile repair businesses. He loved classical music and painting and instilled this creativity into his children and grandchildren. Daddy was always proud to wear (and looked extremely handsome in) three uniforms throughout his life: U.S. Navy, Paterson Police Officer and The Hawthorne Caballeros. He worked hard all his life and after retirement enjoyed part time work at the local Shop Rite. Son, Husband, Father, Grandpa, and Great Grandpa, Friend, Cousin, were all roles he cherished and he passionately loved his wife, children, grandchildren, grandson and soon to be grandson. Carmine leaves to morn his passing his adored children, Mary Falzarano and her husband Jack of Garfield NJ; Antoinette Dickson and her husband Paul of Newton NJ; Carmine Baratta Jr. and his wife Pam of Kenvil NJ; James Baratta of Manchester NJ; beautiful loving grandchildren; Carl Anthony D’Amore and his wife Chrissy; Amanda McIntyre and her husband Kevin; Anthony Baratta and his fiancé Michelle Poinsett and his adored great grandson Chase James D’Amore. He will forever always be loved, always be missed and forever in our hearts. In lieu of flowers kindly make a donation in Carmine’s memory to one of his favorite charities: 1. Veterans Association of America: http://vetsaa.org/477323 2. The American Stroke Association: http://www.strokeassociation.org/STROKEORG/ 3. Joan Dancy & People with ALS (PALS) Foundation in Ocean County PO Box 8157 Red Bank, NJ 07701 4. Paralyzed Veterans of America: www.pva.org

Carmine James Baratta passed away peacefully on Friday August 26, 2017 surrounded by his family. Carmine was born on January 16, 1932 to the late James Leo Baratta and Sadie (Marino). Carmine was raised in Paterson later residing in Garfield... View Obituary & Service Information

The family of Carmine James Barratta created this Life Tributes page to make it easy to share your memories.

Send flowers to the Barratta family.