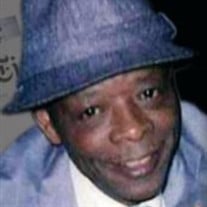 Funeral Service will be Live-Streamed on Tuesday, May 25, 2021 - 6:30 PM EST. Visit the Tribute Wall above to view the Live/Recorded Webcast. Scillieri-Arnold Funeral Home requires all to wear a mask and practice social distancing as per COVID-19 guidelines. ﻿Bobby Earl Bailey was born on 12/07/1938 in Macon, Ga. Bobby was a classy man who always wore a suit, dress shirt and tie. His favorite past time was solving champion crossword puzzles in The NY Times newspaper. While attending elementary school Bobby's grades were very high. He graduated from Ballard Hudson High school where he played Clarinet in the school marching band as well as took a liking to the saxophone and oboe. After high school Bobby moved to Jacksonville Fla, where he worked at a jewelry/pawnshop where he was second in charge. Five years later Bobby married his late wife Trannie and to this union, a son was born. Not to long after Booby moved his family to Paterson, New Jersey and had a daughter. Bobby was a certified Air/Refrigeration mechanic he also worked for Coca-Cola, Sealed Air Corp and a couple of other places. Bobby was preceded in death by parents Arcelious and Irene Bailey, also his wife of 60 years Trannie Bailey. Bobby leaves to cherish his memories two children, both of Paterson Mark Bailey (Lori), daughter Jacquelyn Bailey Castro (Andre), 6 siblings, brothers Billy Bailey (Dortha) of Mercer Allen, Wa, Ronald Bailey of Salt Lake City,  Ut, sister Sandra Drayton NYC, NY, brother Roger Bailey (Delores) Macon Ga, sisters Jacquelyn Stephen (late Stan), and Beverly Harvard (Jimmy) both of Atlanta, Ga, extended family the Harris Family, Keyla (Sabrina McKoy), Cathie Hall a host of nieces, nephews, grandchildren, great-grandchildren and friends Even during times of social distancing, anyone who has suffered a loss deserves love and support more than ever before. Let the family know you care by leaving treasured memories, thoughts and prayers on the Tribute Wall.

Funeral Service will be Live-Streamed on Tuesday, May 25, 2021 - 6:30 PM EST. Visit the Tribute Wall above to view the Live/Recorded Webcast. Scillieri-Arnold Funeral Home requires all to wear a mask and practice social distancing as per COVID-19... View Obituary & Service Information

The family of Bobby Earl Bailey created this Life Tributes page to make it easy to share your memories.

Send flowers to the Bailey family.