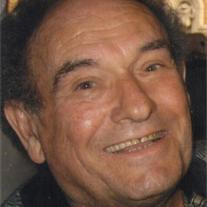 Verrone, Biagio "Benny", of Manahawkin NJ on Sunday December 18, 2011.  Born in Casa Del Conte, Province of Salerno, Italy, on September 21, 1925. He immigrated to the United States in 1947, residing in Paterson, NJ for over 50 years. Benny was a talented and well respected tradesman of the highest caliber. He was the proprietor of Wicker Shoe Repair in Paterson and Bergen Mall Shoe Repair in Paramus. Benny was later employed by the Passaic County Division on Aging where it was his pleasure to deliver Meals on Wheels for several years before retiring to Manahawkin, NJ, where he was free to continue his love of bowling and gardening with frequent trips to Paterson for card playing with his family. He was a parishioner of St. Mary of the Pines. Beloved Husband to his wife, Alice "Mary" Molloy.  Loving and Devoted father to his daughter, Joanne Siracusano and her husband Michael. Cherished Grandfather to Giavanna, Luciano, and Franco Biagio.  He is also survived by his brother Vincent and his wife, Alice, of North Haledon and a sister-in-law, Angelina Verrone of Hawthorne, and several nieces, nephews, and cousins both here and in Italy. A Celebration of his life will be held at Scillieri Funeral Home, 351 5th Ave, Paterson, NJ on Monday December 26th from 4:00-8:00PM. Funeral Service on Tuesday, December 27th at 11:00AM at the Scillieri Funeral Home. Interment will be held at a later date where services will be private. In Lieu of Flowers, Donations may be made in memory of Benny to; The Oncology and Infusion Center, Route 72 West, Manahawkin, NJ where he received physical, emotional, and spiritual support and kindness.

Verrone, Biagio "Benny", of Manahawkin NJ on Sunday December 18, 2011.  Born in Casa Del Conte, Province of Salerno, Italy, on September 21, 1925. He immigrated to the United States in 1947, residing in Paterson, NJ for over 50 years. Benny... View Obituary & Service Information

The family of Biagio Verrone created this Life Tributes page to make it easy to share your memories.

Send flowers to the Verrone family.