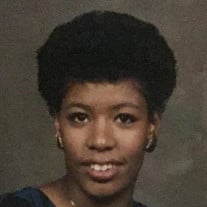 Avon Virginia Draper-Daniel was born January 31, 1966, to Leramsey Mills and Gladys Bowe-Draper in Martinsville, Virginia. Avon relocated to Hackensack, New Jersey at a very young age when her mother passed away. Avon graduated from the legendary Eastside High School in June of 1985 and attended DeVry Business School and obtained a degree at Paramus Business School, where she graduated top of her class in 1989. Avon was a school bus driver for Fairlawn Board of Education for over 12 years prior to her illness. Avon lived and worked in New Jersey, where she last resided until being called home. Avon was described as a bundle of joy, always full of laughter and joy. She loved working with the children from Fairlawn that were on her bus. Avon was smart, very funny, and did not have a problem letting you know what it is either. She was always like a second mother to everyone and was very giving. She loved going out and having fun with her family and friends, no matter how sleepy she was. She always left a great impression on so many people because of how sweet she was. Avon married in June of 1996 to Perry Daniel Sr. and became a loving and devoted mother to two beautiful and bright children Atalyah Daniel and Perry Daniel Jr. Avon’s children were her pride and joy whom she loved with all her heart. Avon and her family traveled so many places. She would do anything and everything to make sure her children grew up to be the best that they could be. Surviving are Avon’s Children Atalyah and Perry Daniel Jr. and husband Perry Daniel Sr. Her brothers Harry and Anthony Draper. Her Sisters Delores Steele and Tonya Draper-Osborne, Nieces Brittney Reid, Shanavia Smith, Jani Bordes and Kayla Draper, and Nephews Phillip Turner, Kalec Thweatt, Harry Draper Jr, Justin Draper, and Anthony Draper Jr.  Sister in law Melissa Draper and Brother in law Maurice Steele, Special Friends Darlene, Nancy, and Audrey and host of family and friends. Avon is reunited with her mother Gladys Bowe-Draper, Sister Doris Draper-Williams, Brother Harold Draper, and Nephew David Bannister Jr. Celebrating the life of the one of God’s Angels. Even during times of social distancing, anyone who has suffered a loss deserves love and support more than ever before. Let the family know you care by leaving treasured memories, thoughts and prayers on the Tribute Wall.

Avon Virginia Draper-Daniel was born January 31, 1966, to Leramsey Mills and Gladys Bowe-Draper in Martinsville, Virginia. Avon relocated to Hackensack, New Jersey at a very young age when her mother passed away. Avon graduated from the legendary... View Obituary & Service Information

The family of Avon Virginia Draper-Daniel created this Life Tributes page to make it easy to share your memories.

Send flowers to the Draper-Daniel family.