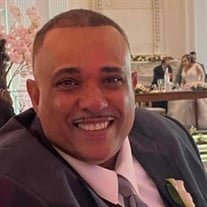 On January 10, 2022, Anthony D. Washington departed this life surrounded by his loved ones. He is survived by his wife Betty Washington, his children Jennifer Guzman, Edwin Lozada, Jason Farmer, Anthony Washington Jr., Christopher Washington, and Chenai Washington. As well as his seven grandchildren, Gianna Guzman, Avery Guzman, Juliette Lozada, London Lozada, Laila Farmer, Cameron Farmer, and Kailynn Washington. He is also survived by his mother Rosalyn Thorne, sisters Kiamesha Washington, Tara Washington and brother Roshan Washington as well as many extended family members. In addition, he joins in paradise his father, A.D. Washington, and a host of other beloved family members. Anthony D. Washington was born in Paterson, NJ, on November 9, 1969, to loving parents Rosalyn Thorne and the late A.D. Washington. He grew up the eldest of his four siblings attending the Paterson Public School system. He was an avid tennis player and won several awards in the sport. While at home with his cousins and father, he loved playing with remote control cars and racing. He graduated from Passaic County Technical Institute with his High School Diploma in 1987. On August 20, 1999, Anthony married the love of his life Betty Washington in Saddle Brook, NJ. They happily raised their children in Bloomfield, NJ, until the time of his passing. From a young age, Anthony was passionate about serving his community. He started that journey following high school into his Passaic County Sheriff’s Department career. He then continued his career with the Paterson Police Department, serving the community in which he was born and raised as a part of the Task Force and Patrol Units. He later started his own business combining his love of cars and his passion for helping others. Deutsche Auto Haus opened in 2003 and is still operating in Wayne, NJ. Anthony always treated everyone like a friend or a member of his family including customers at his place of business. He deeply valued the work he did with his team at the shop, he enjoyed helping every person he encountered. He appreciated life in his time away from work; with a smile and a joke, he always had a glass half full approach to everything. You could often find him on his boat fishing, camping with his R.V., and taking road trips. He also enjoyed riding dirt bikes and quads, cooking on the grill, vacationing to a new island, or hopping on a cruise. However, he proudly vocalized that the most important thing was spending time with his family, often at his summer home in the Poconos. His family thanks you for your well wishes and thoughts; while we are deeply saddened that our time with him was cut short, we are confident that he lived every day to the fullest and that the legacy of love we felt from him daily will live on with us forever. Even during times of social distancing, anyone who has suffered a loss deserves love and support more than ever before. Let the family know you care by leaving treasured memories, thoughts and prayers on the Tribute Wall.

NOTE - Masks are still required to enter the Funeral Home.

Send flowers to the Washington family.