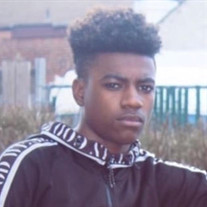 Ahlayah Bowens was born on March 18, 2003 to his parents Fartisha and Gregory Bowens.  Ahlayah was the youngest child of his core family of 4 siblings and also the third youngest of 12 extended siblings. Ahlayah affectionately named Wukkie by his great Aunt Linda and Pookie by his Dad, was the cutest little round head brown baby with silky hair that never grew until he was a toddler. Look at his hair now.  People would say “your baby look like he gets a shape ups”. Just like his siblings he was a hair salon baby, sitting ever so peacefully, never fussing or crying as his mother worked all day into the night. Wukkie was a jovial soul from birth. All he did was laugh and smile.  Ahlayah received his early childhood education in Newark and East Orange public schools system.  Early in life we learned Ahlayah was talented and could sing..after auditions . He was selected to attended Cicely L Tyson’s Elementary & Middle School of Performing and Fine Arts, as a vocal major, then he went on to graduate from John L Costley Jr Ahlayah also attended East Orange Campus High..Ahlayah was currently attending Fresh Start Academy as a junior at his untimely passing. Ahlayah was a typical child who loved sports, riding bikes and playing in the city parks. He also became an athlete of baseball with the South Ward Newark Eagles Football with the Orange Hurricanes, South ward Bulldogs. He also played atHart Middle & Cicely L Tyson’s basketball team. Also winning championships and trophies over the years with in the The Harry James summer league Mayor Ras Baraka summer league EO parks and recreation. AhlayAh forged a brotherhood with his friends too many to name. In school and on &  off the court and field. He became a Son to their parents alike of especially Talina and Joe . Ahlayah was adored by many with his thick eyebrows big beautiful eyes and silly theatrics...he was infectious... respectful to those that respected him .... his gentle nature always made the best moments that just melted your heart thinking I really like this young man...as many advocated him and his life  Ahlayah loved his family he’d say from youth if you asked Ahlayah you leaving mommy?  HE yell no !! I’m no going no where...HE WAS NEVER MOVE OUT he never spent a day without his family or friends..AhlayAh became focused on his rap music with his brother Izaraa (Tweak) and Ahlayah became LiL BANKO you can see them on YouTube and Apple Music he had a career ahead of him...his family and friends support him as Banko World !!LiL Banko will be sorely missed but we can dance in his memory...He was honorable hilarious with a goofy personality to brighten your darkest day...charitable as well if he asked for money he’d make sure his friend got a cut too.... as God would align his death..in his final moment He was comforted by his friend Quadir. Sadly on Father’s Day, gun violence attributed the death of Ahlayah Bowens who began his transition into the ancestral realm at 11:24 on June 20,2021 at University Hospital.  Left to cherish his memory are his loving parents Fartisha Hutchins & Gregory Bowens ; great grand mother Gloria Chandler step parents Wanda Bowens and Wahid Shakoor Omar And Daniel Townes siblings Fatisha Bowens Ahchaaryah Bowens and Izaraa Bowens; Rebekah Bowens, Tabitha Bowens, Aniyah Townes , Shamar Townes , Khyree Townes , Zanaie Townes , Kayla Landers, Mychal McConnell, June Rose McConnell, Taheda, & Kennan; his aunts Vera, Sakina, Shea, Aliyah, Vita & Patrice; his uncle Kyle Jones; one nephew Omar S Townes lll ; two great uncles four great aunts the Townes family and a host cousins god siblings and best friends most notably KaZjanee BG Kyree Mooch. Ahlayah Banko Bowens is proceeded in death by his grandparents Willie and Janice Hutchins, Janice Bowens, and Gregory Shahid Abdul-Muhammad Chandler and his brother Omar Townes.  Even during times of social distancing, anyone who has suffered a loss deserves love and support more than ever before. Let the family know you care by leaving treasured memories, thoughts and prayers on the Tribute Wall.

Ahlayah Bowens was born on March 18, 2003 to his parents Fartisha and Gregory Bowens.  Ahlayah was the youngest child of his core family of 4 siblings and also the third youngest of 12 extended siblings. Ahlayah affectionately named Wukkie... View Obituary & Service Information

The family of Ahlayah Bowens created this Life Tributes page to make it easy to share your memories.

Send flowers to the Bowens family.